A fish eye view of Brazil 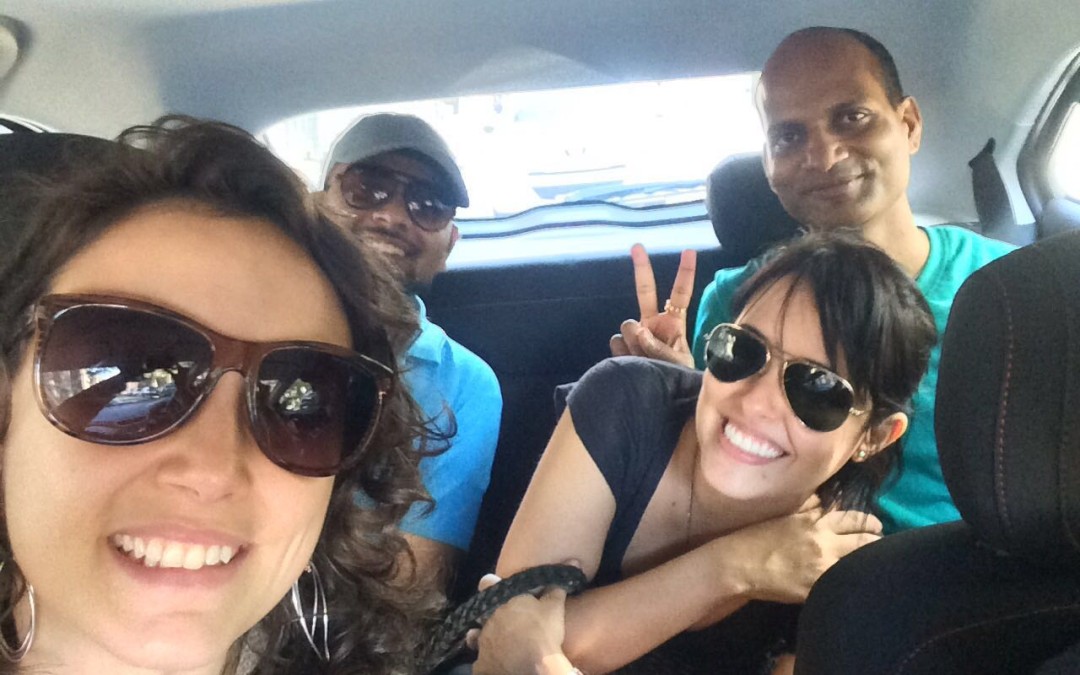 A fish eye view of Brazil

The best way a student ever describe his experience in Brazil. Stories like that makes all the work make sense!!!!

Well it was 9-00 AM in the morning, the flight from Miami just landed in Tom Jobim international airport, Rio de Janeiro.

Tired from being on a long flight from Dallas, Texas to Rio I reluctantly get up to get out. First time in Brazil for a dude, who spent all his life growing up in Texas, to me it was just another Mexico.

However, is it? not at all, far from being a Mexican getaway for me. Before coming to Rio I did some research about the city, city seems to be exotic, the food, culture, beaches, and the mountains.

However, the highlights back home in USA was on the crime, the favelas and other derogatory remarks. Anyway, with mixed emotions I set my feet in the city of gods and imagine it is going to be all right, as I know a little bit of Spanish – really, let us see.

Took a cab to my hotel in Copacabana and then first bummer, people here speak Portuguese, which is very different from Spanish. Many Spanish speaking people will say they know Portuguese , but if you love Tex-Mex food and you go to a restaurant and say I want “pinto beans” you are game, if you do not know the meaning of the word “pinto” check it out using Google translator. Slowly I started learning the language, the carioca way, which in Rio is the coolest way to learn the language, and started knowing Brazilian people. The first place, my friends and colleagues from Brazil took me was a place called Lapa. I was like, what is this place; to people from RIO this is as our Bourbon Street in New Orleans, reminded me of home. I was surprised how many people can fit into a small square foot place dancing, drinking, shouting and be happy. Therefore, I tried to be the cool carioca and my Brazilian friends inspired me to spark a conversation with someone I do not know. This is the second bummer, if you do not speak the language at least a little, striking a conversation with a beautiful Brazilian woman who seems to be interested to talk is next to impossible. Don’t get me wrong people in RIO are polite and you will get a very polite thank you and indication of “cala sua boca”. However although the girls did not want to strike a serious conversations, the men were very friendly and interested to talk in English , guess it gives them an opportunity to speak in English with a “gringo”. The amazing thing is, you can make a friend with a perfect stranger and drink beer and be merry.

So my next steps other than going to the standard tourist places like “Cristo Redentor” and “Pão de açucar” was to come up with a strategy, I knew I have to stay in Brazil for earning my bread so I need to do something about it. I cannot keep on missing my city Dallas and feel more homesick every day; it is going to be a no brainer to have a demoralizing effect. I spoke with the HR of my company and they approved a group-Portuguese class for foreign employees, I went out for a hunt to find the right school for me. My point of view was straightforward, I need survival skills in Rio so I will go with some schools where it makes me street smart. I found the one after a little search, it was Fala Brazil, I met my teacher Marcelle, who is also the owner, so an entrepreneur free spirited individual like me and after the meeting I decided lets close the deal – “fechado” the cariocas use this word when they close a deal.

My experience with my learning Portuguese was like, is it possible for a knucklehead like me, who do not speak any other language other than English, I will not count the Spanish, because before I came to Brazil I only knew 4-5 basic Spanish phrases. Slowly I started learning the language, started speaking with cabbies and in restaurants and practiced with my colleagues in Brazil. However, let me tell you something you need to have a free spirit and lot of “Red Bull” after-drinking energy to get a grasp on the language. Bottom line I survived, I learnt a lot about the culture, the festivals, the emotions, the music, the sensitivity of the people, bottom line which is what we Americans only care , it seemed the good times had become “Gracas a Deus”. I was still missing Dallas, but now only sometimes when it was getting overwhelming for me to grasp all these new shifts in my life.

I started going out now all by myself, with the basic survival skills in Rio it was not very difficult although sometimes the confusing “sem-gas” and “com-gas” water created some problem while ordering food, I am used to sparkling water and regular water so water with gas reminded me of some fizzy drinks. After a couple of mistakes and drinking water with gas, I learnt it the hard way to say, “sem gas por favor”. I visited some of the most beautiful places in Rio and trekked almost all of them. I love mountains and the beach, so walking on a nice long beach during the sunset or trekking to “Sugarloaf Mountain” was a good way to spend the weekends, which could be boring sometimes if you are living alone. I started getting many invites for “churrascos” party, which is the Brazilian style barbeque, where people, friends, and families get together and enjoy a good time drinking beer and doing a barbeque. My first question when I went to a “churrasco” was – hmm where is the hamburger bread? Brazilian people were very polite to answer my stupid question saying in Brazil they do it differently and eat the meat without the bread. The bread and tortilla culture is not very prevalent here in Brazil and people prefer to eat more rice.

This is still one of my pains in Brazil and whenever I go back home, I eat Tex-Mex food almost the entire week after all “Once a Texan is always a Texan”.

Things started improving in my subsequent visits to Lapa, it became interesting, and I was able to participate in a conversation spoken in Portuguese with one condition – “Fala devagar por favor, eu sou Americano, eu ainda estou aprendendo Portugues”. This worked like a charm, they liked my accent but moreover my attempt to participate and I thought I sounded ridiculous but my Brazilian friends always gave me inspiration.

When I went back home I was the center of conversations, my friends, my family, my friend’s family all wanted to know about Brazil especially Rio, questions were thrown randomly and I answered them with confidence and sometimes spoke Portunhol, rare combination of Portuguese and Spanish to impress a cute looking Mexican waitress in a Mexican restaurant in Dallas. Yes, whenever I went back home I made it a point to eat a lot of Mexican food.

Slowly I fell in love with the city, got used to all the rush and the heat of the tropical land, started taking showers almost 3 times a day – which is must for all cariocas of all gender and age, they will not go anywhere important before taking a shower. I cheered for the Brazilian soccer team during the Olympic Games of 2016 and cried when the US basketball team won the gold because I missed the finals. I had to choose a soccer team in Rio because soccer is like a religion in Rio and if you do not have a team you are “bobo”, so I selected the team of my neighborhood “Botafogo” which later on people said was a bad mistake as this is a team for losers. I really did not care because back home my Dallas Cowboys were not doing great as well but we had hope. This is what I started to believe; I have hope in this new country and whatever happens, I will survive.

I met the love of my life in the city and she taught me how to act like a Brazilian, while we Americans live and die on consumerism, “Amazon.com” is the place where we spend most of our time trying to get a great deal , Brazilians goes to different shops, checks prices, compares them and finally buy or not buy. “Comprei barato” – bought cheap. I started understanding, that life is not just about consumerism but also about proper planning, preparing for worst times and still have fun. Back home I really did not have a real weekend, sometimes we are trying to survive or beat the rat race but here in RIO, it’s always “fica tranquilo” stay cool.

People make friends with perfect stranger, drinks beer on streets and have a good time. This does not mean life is easy for Brazilians, it is a daily struggle after all the political difficulties and job cuts but still they get time to say “deixa comigo” – leave it with me, and I will take care of it.

Shall I spend the rest of my time in Brazil, I do not know, maybe not.

I still miss Dallas and home, but will my stay in Brazil be awesome, oh yeah absolutely!!!